A Green Route for the One-Pot Synthesis of 1,2-Disubstituted Benzimidazoles Using Iron(III) Phosphate under Solventless Conditions

A simple, convenient, and environment-friendly method for synthesis of 1,2-disubstituted benzimidazoles in high yields under extremely mild conditions, has been described. The methodology described, involves condensation of o-phenylenediamine derivatives with aldehyde derivatives in presence of catalytic amount of iron(III) phosphate under solvent-free conditions. Although previous methods are available in literature for synthesis of such compounds, the highlight of this new methodology is the demonstration of efficiency of solvent-free conditions in such reactions. The authors have specifically mentioned the usefulness of the catalyst as “iron(III) phosphate is reported as a green, reusable, recyclable, environmentally safe, inexpensive and commercially available catalyst”.

The Reaction of Interest: 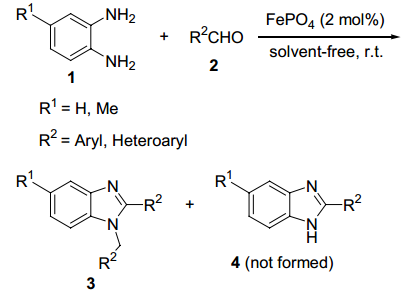 Applying the procedure illustrated for synthesis of 1,2-disubstituted benzimidazoles in scheme 1, to reaction of o-phenylenediamine (1 mmol) and benzaldehyde (2 mmol), the reaction conditions could be easily optimized.