This paper reports the synthesis of a new class of acrylamide thioglycoside derivatives utilizing a one-pot synthesis. Further heating of the resultant glycosides with hydrazine is reported to give pyrazole derivatives. Among those synthesized, some compounds were tested for cytotoxicities toward the hepatoma cell line (HEPG2). A few of those are reported in this paper to have high cytotoxic activity against (HEPG2) cell line. The importance of the OH moieties in the free glycosides has been highlighted as being vital for their potency. 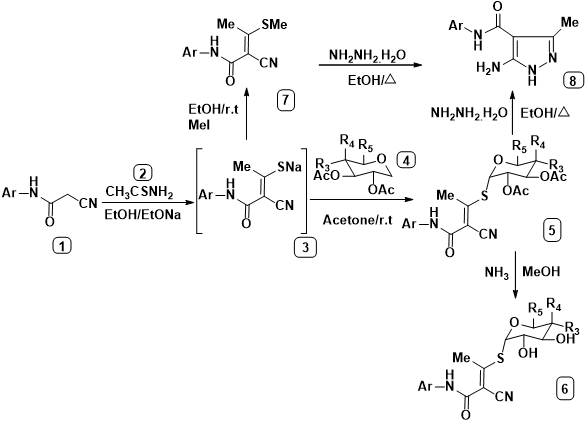 All the reactions in this paper are summarized in Chart 1. A simplified form is presented here. Each class of compounds is further subdivided in their naming using a, b, c, d, e & so on as synthesized/ used. Refluxing anilide derivatives 1a-d with thioacetamide 2 in EtONa/EtOH is reported to give the corresponding stable sodium 2-cyano-ethylene-1-thiolate salts 3a-d. These salts 3a-d were chosen as the key intermediates to react with gluco- (4a) galacto- (4b), xylo- (4c) and arabino- (4d) pyranosyl derivatives in ethanol at room temperature to give the corresponding S-glucosides 5a-d, S-galactosides 5e-h, S-xylosides 5i-l, and S-arabinosides 5m-p, respectively. Condensation of 5 with hydrazine in ethanol gave the corresponding 5-aminopyrazole derivatives 8. Alternatively, pyrazoles 8 could be prepared by reaction of 7 with hydrazine hydrate. Ketene compounds 7 were prepared by the reaction of the sodium 2-cyano-ethylene-1-thiolate salts 3 with methyl iodide in ethanol at room temperature.