This paper reports 1-Naphthyl-2-cyanoacetamide used as a precursor for the synthesis of different novel heterocyclic moieties such as 5-Aminopyrazole, thiazolinone, pyrazolo[1,5-a]pyrimidine, 4H-pyrazolo[3,4-d]pyrimidin-4-one and pyrazolo[3,4-d][1,2,3]triazine. All prepared compounds were characterized by different elemental analyses and spectral data. The authors have classified the compounds as a novel class of heterocyclics and the process as efficient. 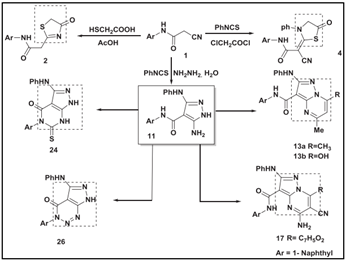