This article describes a method for cyclic olefin polymerization employing a non-chelated monodentate benzimidazole Ni(II) complex. The specific reaction catalysed, is the vinyl polymerization of norbornene. The article also describes the methods for synthesis of the ligands and the corresponding Ni(II) complexes along with the procedure and results of their applications as potential catalysts for vinyl polymerization of norbornene. The methods describes are reproducible, but suffer from the problem of producing low yields. I have some suggestions for increasing the overall yields.

The article can be divided into two major parts, one dealing with the synthesis of the precatalysts and the other with the catalytic properties. The first part is represented by the Scheme 1 in the experimental section as: 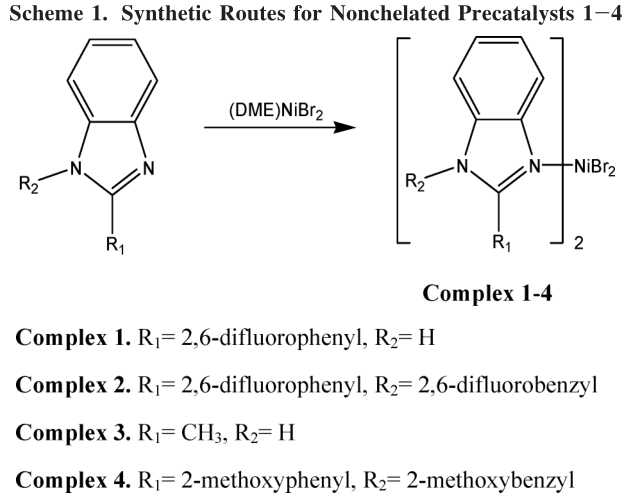 The action of the synthesized Ni(II) complexes (1 – 4) as precatalysts isndescribed in detail, but the authors have not included a general reaction for the process, in the article. A figure is provided in the abstract instead.

Reproducing the results of catalysis has been fairly easy and the choice of structural features for designing the precatalysts is reflected in the effectiveness of the four complexes.