More aldehydes need to be tested for reproducibility

This paper describes the synthesis of dinuclear and polymeric copper complexes of a sulfonated Schiff base ligand, 2-(2-pyridylmethyleneamino)benzenesulfonic acid. Also described, are the crystal structures, magnetic properties and catalytic application of these complexes in Henry (nitroaldol) reaction.

The method for synthesizing the complexes is an interesting one, as it involves substitution of “chloride ligand of [CuLCl]2 by the appropriate pseudohalide upon reaction with its sodium salt (NaX), where X= azide, thiocyanate or dicyanamide for 1, 2 or 3, respectively” as pointed out in the syntheses section. 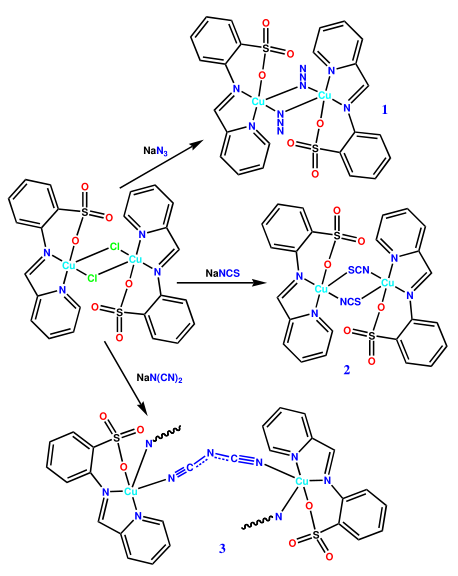 Application of complexes 1-3 in the Henry reaction is also a major highlight of the work.

I used the synthetic route to obtain the crystals of the copper complexes as the authors pointed out. The ligand and the precursor complex were prepared fairly easily following the procedure in reference 5a. All the copper complexes were obtained in good yields. The variable temperature magnetic susceptibility studies confirm the weak antiferromagnetic exchanges in both 2 and 3 which the authors have claimed. The complex 1 exhibits weak ferromagnetic coupling between the copper centres.

The representations of complexes 1 and 2 as having four and eight membered rings correspond well to the models for magnetic susceptibility studies. I however, would not consider the complex 3 as having an eight membered ring as it involves hydrogen bonding. Antiferromagnetic coupling between the copper atoms is confirmed by temperature dependent magnetic susceptibility as pointed out by the authors in “The complex 3 behaves like an antiferromagnetic s = 1/2 Heisenberg chain (Fig. 8) for which the Bonner-Fischer equation can be applied”.

As listed in Table 3, the nitroaldol (Henry) reactions for benzaldehyde were efficiently carried out in aqueous medium for all the tested catalysts. As per the information in Table 4, the reactions were reproducible with high yields.

I would recommend carrying out the Henry reactions for aldehydes like pyridine-2-aldehyde, pyrrole-2-aldehyde, pentanal, and other long chain aldehydes to check the effectiveness of the complexes as catalysts. The procedure can be followed from the article Molecules 2015, 20, 6224-6236; doi:10.3390/molecules20046224. Reactions in aqueous medium should be carried out to maintain the homogeneity in reaction conditions.