Work is good, descriptions could be better

This paper reports a methodology for synthesis of substituted benzimidazole, benzothiazole, and benzoxazole in aqueous media. The method is novel in its approach of utilizing water as the medium, making it fit for a green chemistry protocol. The paper reports the screening of various metal oxides for carrying out these reactions and choosing the nano-CeO2 as the preferred one. The adequacy in amount of catalyst, its recyclability and the probable mechanism of its action have also been explored. A thorough study is reflected in the synthesis of 67 such compounds. 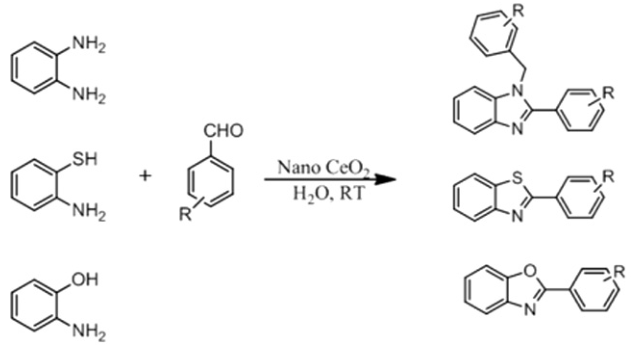 It is a very clear description of the work! I am wondering if you have any comments on the mechanism of the catalysis by CeO2 nanoparticles. Do you work in this field?

I am asking this question because one of the intermediate products in our company is thin film of highly (100) textured CeO2 layer. We can make such films on the non-textured substrates, introduce other rare-earth elements and adjust the film thickness from several nanometers to several microns.

Mechanism of action of nano-ceria

Three types of reactions are described in the paper.

1. Synthesis of benzothiazoles: The essential mehanism is the dehydrogenation, via aerial oxidation in which the thiazoline intermediate is converted to the thiazole. The thiazole is more stable since it enjoys the aromaticity of the benzothiazole ring.

The mechanism is depicted in two similar papers. 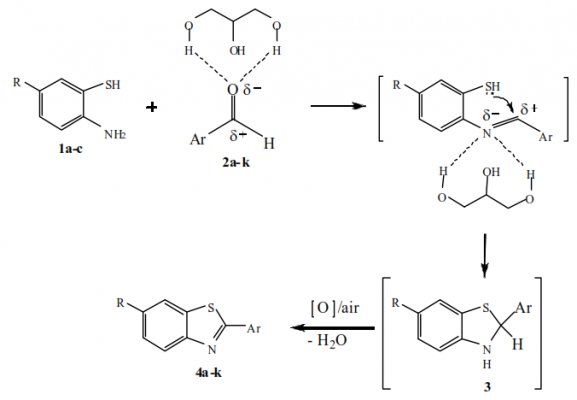 2. Synthesis of benzothiazoles: The mechanism is similar to the previous reaction.

In these two procedures, the role of nanoceria is minimal as far as my understanding goes. It is primarily due to arial oxidation which can be achieved even with one drop of Cu(NO3)2 solution in aqueous medium. The catalyst is to promote the oxidation.

3. Synthesis of 1,2 disbstituted benzimidazoles: In this mechanism, however, the role of nano-ceria is quite significant as it gives only 1,2 disubstituted product and not a mixture. The mechanism will be similar to that in the follwing paper. This will also be of your interest since it also employs a nano solid acid catalyst.

Synthesis of 1,2-Disubstituted Benzimidazoles in the Presence of SBA-Pr-SO3H as a Nano Solid Acid Catalyst. 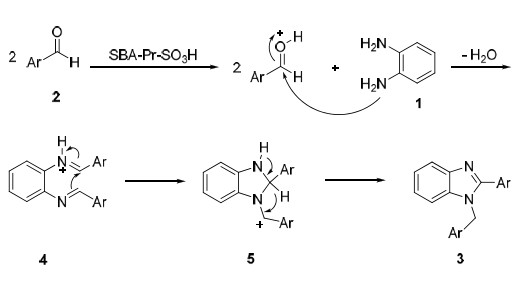 At first, the solid acid catalyst protonates the carbonyl group of aromatic aldehyde (2) which then condense with 1,2-phenylendiamine (1) to produce dibenzylidene-1,2-phenylenediamine (4).
In the presence of catalyst, ring closure produces five membered ring (5) which produced 1,2-3 disubstituted benzimidazoles (3) by deprotonation and [1, 3] hydrid shift.

I hope this will be useful to you.

I am not an expert on nano-chemistry, but have tried some reactions in the field.