Polymers could replace metals in electrodes for prosthetics

Modifying electrodes, to include polymers instead of metals,  could be beneficial for progressions in making prosthetics. This particular hybrid of a study and a review, focuses on the possibilities of improving cochlear and bionic eye prosthetics. The study was conducted in a comparison method, comparing the effectiveness of using a metal electrode versus using a polymer electrode. Tests were run to determine the polymeric electrode's ability to reduce electroreactive surface area and are able to reduce infection in the location of the prosthetic because of their ability to aid in drug delivery systems.

Neural Interfaces and Electrodes: What they are and how they are used

Neural Interfaces are composed of nueroprosthetic electrode configurations and their purpose is to aid in restoration of the  neuronal firing threshold upon excitation. The electrodes are made with metals such as platinum, iridium oxide and carbon. All of which are able to be used as electrodes for they are able to conduct a level of electricity. The electrode and the neural interface are able to connect together to  simulate and record. Sometimes there is a gap in the connection, which is called the significant fluid gap.

Cochlear implants, also a form of stimulating implants, use an electrode induced by platinum. Once excited, the platinum releases ions that create the significant fluid gap stopping a strong connection of the neural interface and the electrode. Bionic eye implants are also stimulating and are created using platinum electrodes. The platinum electrodes are an issue because they are proven to be less effective in implantation because of the significant fluid gap that is formed. In order to be more effective, the electrode needs to be able to produce high density arrays that come from thousands of electrodes being used at once. 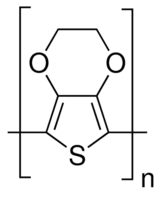 Overall, the study shows that polymers would be a better substitute than using metallic electrodes for implants. It is proven through tests such as electrochemical impedance spectroscopy, cyclic voltammetry, and atomic force microscopy. The bodily tissues do not easily reject the conductive polymers. However, more studies need to be done on the polymers for they are associated with mutagenicity and hypersensitivity.