Stimuli-Responsive Polymersomes as Nanocarriers for Drug and Gene Delivery

Polymersomes in nanocarriers and varied environments

Safety Concerns
None or clearly mentioned

The premise of the article is to summarize the ways in which stimuli- responsive polymersomes are involved in the creation of nanocarriers, as well as their contribution to each nanocarrier's performance in varied environments or stimuli. Polymersomes are chosen to form nanocarriers ,that are used  for Drug Delivery Systems (DDS) and gene delivery, because of their block structure and versality in being able to form hydrophobic as well as hydrophillic bonds.

After manipulation of stimuli, such as changes in temperature and pH, they can resemble the shape of liposomes, which are thicker in membrane, lower in permeability. These changes allow the copolymer to be more useful increasing the release factor of drug delivery systems. Some copolymers have hydrophillic properties that enable them to form protective barriers for the nanocarrier, acting as a type of covering

The hydrophopic and hydrophillic properties of the polymers are crucial in DDS. The more hydrophobic the polymer the higher the release of the drug into the system because the water is drawn more upward due to degradation. Degradation causes the increase in drug being relased for it is trying to split into smaller molecules or monomers. There are other factors that contribute to the increasing or decreasing the release. The passage accurately highlights the molecular weight of the polymersomes being a critical component in how the polymer functions. Heavier polymersomes are faster to erode and are not easy to permeate. The authors researched that other scientists used polymers poly(ethylene glycol) for its hydrophillic properties and poly(lactide) or poly(butadiene) for their hydrophobic properties. In order for the nanocarriers to be formed and used for delivery, a polymer with hydrophobic properties and another polymer with hydrophillic properties must be present the information present is therefore plausible. Below is an example of a triblock

Amplilic triblock copolymers are able to form into polymeric vesicles that aid in delivery, because of their well balance of hyrophobic to hydrophillic copolymers. They are formed as ABC triblock copolymers where blocks A and C are hydrophobic. The properties of the outside polymers prove that the middle block polymer, B, would in fact be hydrophillic, forming an asymmetric structure. Their structures are able to be detected through DLS, Dynamic Light Scattering, showing their triblock nature. The following DLS/TEM image shows their structure. The hydrophobic polymers are proven to be larger in nature and are shown as the larger darker circles. 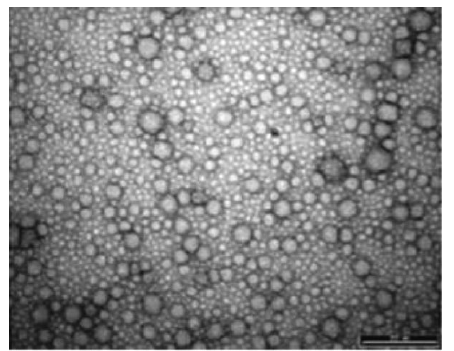 The polymers are very responsive to stimuli such as changes in pH, redox and temperature. The range of pH determines that there may be a trigger point for the polymer to degrade and start the releasing process. At above the biological pka, block copolymers are able to be used to form nanocarriers and the hydrophobic groups remain uncharged. At a lower pH, the hydrophobic groups become charged. Polymers that are temperature sensitive change phases and are insoluble upon heating. Thermosensitive nanocarriers are still currently being explored. The redox response of polymers are helpful for therapeutic applications such as biosensing and biodetection.

The publication gives a very clear and concise review of different types of polymers, along with their structure, and how they are used to create nanocarriers, which aid genetic and drug delivery systems. This pulication is most helpful not in procedures but for learning more about polymers and polymersomes.